I write this piece to quickly draw our critical consciousness to this “infamous”, yet significant, speech of P.W Botha, the erstwhile President of the apartheid South Africa, which a friend drew my attention to in the course of the week (even in the overwhelming ambiance of my grudges against Nigerian leaders, but gratifying reluctance in discussing them), after reading one of his email’s entitled “Now That Botha Must Be Taken Seriously (or whatever that means)!”. For the sake of emphasis, I decided to retain the title.

The reason for bringing up this speech anyway is to enable us have a rethink of the horrifying events that have plagued our nation Nigeria, and by extension Africa – corruption, civil unrests and wars, leadership crisis, kidnappings here and there, consumerism and underdevelopment, and more recently, terrorism – since independence. These horrible events, we must recall, have for a while now been attracting blatant reactions from sensitive and oversensitive people to an extent that even the silence of phlegmatic individuals has become the din that prevents us from hearing ourselves anymore. Therefore, at this critical time, existential questions demand immediate answers as they continue to gaze at us shamefully and a need for us as Blacks to reconsider Botha’s chauvinistic and supposed malign speech. This speech, of course, seems the only formula that couched, thoroughly and fittingly, our rhetoric of confusion, most especially at this moment when our entire socio-political realities continue to draw hoots of derision and despair from us, thus, making us all becoming improvised, nay, accidental social critics of our government.

It is worrisome that our ‘shoeless’ President, his rascally-spokesmen as well as his agents at the helms of affair, have flaunted their senseless and selfish corrupt bellies, in several ways, for far too long and have failed to confront the underlying challenges that continue to threaten our cultural affinity and self proclaimed unity that bind us, both as a people and a nation – to confirm the former US Secretary of State, Mrs. Hilary Clinton’s recent thesis that Nigerian government under President “Goodluck” Jonathan (Phd)  “have squandered their (Nigeria’s) {emphasis mine} oil wealth; they have  allowed corruption to fester, and now they are losing control of parts of their (own) territory because they would not make hard choices”. (As reported by Sahara Reporters) – 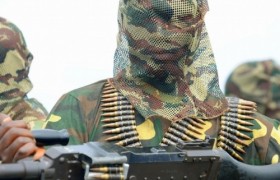 It can also be recalled that Jonathan before now had become more popular with his public display of gross insensitivity to the plight of the citizens of this country and had been busy canvassing for cheap political solidarity to consolidate and ensconce him in power for as long as his power- drunk soul violently lust for, while Nigerians die brutally in their thousands and many more children kidnapped into what seemed to be a perpetual servitude. What would further confirm Mrs. Clinton’s statement that Nigerian government has become “somewhat derelict” would be Jonathan’s recent statement that we, the citizens of Nigeria, had better direct our anger to Boko Haram and not him. (That is the man we entrusted with our government as well as security of lives and properties).

Let us also bring again to mind the fact that our President Jonah danced ‘Skelewu’ on one of his several misleading political campaigns around the country (one should not forget that too soon) – a foolhardy attempt at creating the impression that all was well, or that it would be well – until (not only America-will-know) the entire international community got to know the horrific occurrences in this country, a well-conceived job-well-done by those on the social network whose outbursts and protests eventually got the eyes and ears of the international community. All these are enough to make anyone belief, to paraphrase Senator John McCain, that Nigeria has a practically non-existent government.

The events of these past months have threatened our existence and essence as African peoples (not only Nigeria) and have made many of us to begin to ask some pertinent existential questions that affect our beingness as a people and a nation. These events have shattered all hopes we have in this country and fatigued – if not killed – the patriotic morale of our people, worsened by the unresponsive and unsympathetic attitude of our leaders, most especially that of Jonathan alongside his wife whose dislocated English have served and still serves as comic relief for the battered citizens of this nation at this critical time, since the Civil War.

Now that terrorism has become the order of the day, now that the government is unserious with securing the lives of its citizens, now that our soldiers are ill-equipped to confront the Boko Haram menace, and now that foreign forces have been called upon (we have always depended on them) to save us and bring back our girls with little or no progress so far, Botha’s speech should be turned to with much seriousness and open-mindedness. Let us all have a re-think of whether we ever truly possess the positive attitude and mental capacity to sincerely govern ourselves as Black people. I make bold to say that since independence of the African nations and, by extension Black people, I am yet to see, beyond doubt, a progressive Black country, even South Africa and Ghana that many Nigerians, nowadays, rate high are not unbound by Africa’s tales of woes.

The following is a speech made by former South African President P.W Botha to his cabinet. This reprint was written by David G. Maliu for the Sunday Times, a South African newspaper, dated August 18, 1985.

“Pretoria has been made by the White mind for the White man. We are not obliged even the least to try to prove to anybody and to the Blacks that we are superior people. We have demonstrated that to the Blacks in thousand and one ways.  The Republic of South Africa that we know of today has not been created by wishful thinking. We have created it at the expense of intelligence, sweat and blood. Were they Afrikaners who tried to eliminate Australian Aborigenes? Are they Afrikaners who discriminate against Blacks and call them Niggers in the States? Were they Afrikaners who started the slave trade? Where is the Black man appreciated? England discriminates against its Black and their “Sus” law is out to discipline the Blacks. Canada, France, Russia, and Japan all play their discrimination too. Why in the hell is so much noise made about us? Why are they biased against us? I am trying to prove to you all that there is nothing unusual we are doing that the so called civilized worlds are not doing. We are simply an honest people who have come out aloud with a clear philosophy on how we want to live our own White life.

We do not pretend like other Whites that we like Blacks. The fact that Blacks look like human beings and act like human beings do not necessarily make them sensible human beings. Hedgehogs are not porcupines and lizards are not crocodiles simply because they look alike. If God wanted us to be equal to the Blacks, he would have created us all of a uniform colour and intellect. But he created us differently: Whites, Blacks, Yellow, Rulers and the ruled. Intellectually, we are superior to the Blacks; that has been proven beyond any reasonable doubt over the years. {…} It is our strong conviction, therefore, that the Black is the raw material for the White man. So, Brothers and Sisters, let us come together to fight against this Black devil. {…} By now every one of us has seen it practically that the Blacks cannot rule themselves. Give them guns and they will kill each other. They are good in nothing else but making noise, dancing, marrying many wives and indulging in sex. Let us all accept that the Black man is the symbol of poverty, mental inferiority, laziness and emotional incompetence. Isn’t it plausible therefore that the White man is created to rule the Black man? Come to think of what will happen one day if you woke up and on the throne sat a Kaffir! Can you imagine what would happen to our women? Does anyone of you believe that the Blacks can rule this country? {…} {Emphasis mine}