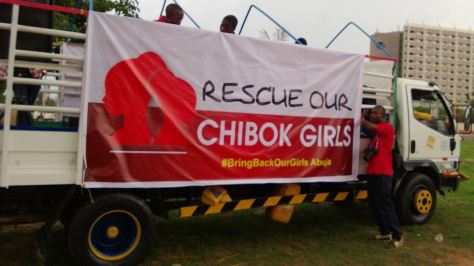 By principle, a man that cannot protect his neighbor is himself in a big security mess.

When GEJ ordered Eagle One to Paris rather than Chibok, he was not doing the unstated; he already hinted during his last media chat that Shekau and his boys will kill anyone that ventures Sambisa. I must doff my hat for the men and women that are still living in that village of terror, Chibok; they are stronger than this CinC with all of his appurtenances of military might combined with the strength of the international allies. Even when GEJ had the opportunity to get grasp of the situation by granting just few minutes’ audience to the protesters of #BringBackOurGirls in Abuja yesterday which could have placed him on a better pedestal with the people, he blew it. Those of you that think you are helping this guy, there is God o!

Chibok is several miles away from Lagos where I live. Some oafs will say, why bother themselves with whatever is happening in far away North East. Well, let me correct that impression, we are all in a CHIBOKIAN STATE, a state void of national security; Kano and Jos were caught in the web few days ago. If we would not stand and reclaim our country from this deviltry then it will be a matter of time that we all will sleep and wake up to see that we have been held hostage in our different states. Boko Haram is not in any way Islam; it is politics gone bad and it is high time we stopped being resilient and started being restless until that change that we want to see is achieved.

My adrenaline is pushing me toward the insouciance of this administration as I had wanted to share  #PAUSIBILITY: CONVERSATION WITH BENJAMIN, A DANFO DRIVER,  that spoke about the blind greed of our leaders but I would not go that way. Even when Maku said on Channels TV that lack of weapons is not responsible for the slow progress in the fight against Boko Haram. Also, Abati’s deceitfulness in presenting 2012 filed photos as the current operation of the army in Sambisa. The shameless show of insensitivity in Ekiti by APC a day after many lives were lost in Jos (a clear indication that our political class is saturated with Satan’s siblings). I will put myself under check to make sure I tread the path of reconstruction. That is what we need now as a nation as these guys are deceit- skinned with their tongues made for lies.

It is believed that poverty contributes to this madness that we have at hand but the arrests of the likes of Abdulmuttallab, Ogwuche, etc all point to one thing: these insurgents are not composed of just riff raffs; it will not be a surprise that Shekau may be found to be well read if properly charted. Most of these guys are radicalized in Sudan and Somalia while attending one Islamic school or the other. Can’t the Federal Government through the National Council for Islamic Affairs establish standard Islamic schools in Nigeria that our nationals will not need to go anywhere else to study the Quran (So sorry I forgot that ASUP has been on strike for almost a year now)? Also we need to quarantine our children that are currently in or going to those countries so as not be caught in webs of surprises. In essence, we need parents to be responsible for their children/wards wherever they are sent to study or for vacation. It is not just by making funds available to them but being responsible to the point of knowing the company they keep and whatever they are doing. We all should imbibe good neighborliness by being our brothers’ keepers. What happened to the communal living we were known for? If anyone has any useful piece of information let us volunteer such. 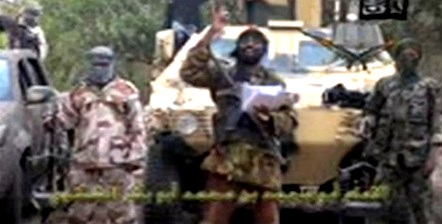 I suspect a place that is supposedly an Islamic Remand Home for boys and girls somewhere in Oojo LGA of Oyo State. When I checked on a friend that was bundled by his parents to that place during my University days, coupled with my present experience, I can beat my chest that Oyo State Government and the Nigeria Police would have to look into their activities.

The other day that Shettima ran to Abuja and told the whole world that the weaponry of the BH guys far outsmart that of our soldiers, some of us devoured him for uttering such a statement, especially that SSA on Public affairs (I heard he has the control of some retinue of assassins?). Also, the claim by the former COAS that there are informants/fifth columnists in the army working with #BokoHaram is another pointer.

What could make a soldier who had sworn to defend the territorial integrity of his country share sympathy with insurgents? It is either his conditions of service are unfavorable to him or he is getting a better sweetener from the enemy. I make bold to say that the advertised recruitment into the Armed Forces is a malfeasance through the demand of #2500 placed on every applicant by the authority. True patriotism and the quest to serve the fatherland should be the watchwords. The Armed forces should not be another dumping ground (Read: A HEARTLESS GOVERNMENT: A TACTLESS PRESIDENT).

I do not want to cite the motivation of our soldiers as it is obvious for even the blind to draw an informed conclusion but my inquisition is what is currently being done to change the tides in encouraging these soldiers to fight this insurgence? Every activity in the military should be carried out with STRICT circumspection of interlopers. Our armed forces must be totally stripped of politics and well catered for; provision of seasoned weaponry is non-negotiable. Turtle Ninjas will never defeat RoboCops.

One of the things that stuck with me from a book that my grandfather bequeathed to me, OUR AMERICAN GOVERNMENT, is “federalism ends at the shore”. What that means is that, though divided into fifty ‘true’ federating states with different vested interests, Americans will come together as one and fight whatever aggression that may arise against them as A NATION.  Boston experience is the most recent.

I hereby join many Nigerians that are calling on our ex-Heads of State and Generals to join hands in this fight against our common enemy. Please, I am not being a crimp here, but sirs, kindly disregard whether any invite by this government is extended to you or not. I read about the Maitasine upsurge and how GMB ran them out of our territory, the same path this BH came from; read how Gen. Olusegun Obasanjo fought to keep this nation as one during the Biafran war; how gallantly different military men: Alani Akinrinade, Isa Sama, TY Danjuma etc,  fought to safeguard this entity that we have today. Sirs, will you now watch the efforts you put into this nation fizzle out because of some dirty politics? I bet you will say no, not while you are alive and active. Governors, Members of NASS, Local Government Chairs, and ‘sane’ religious and traditional leaders are not left out in this call.

Though in #PAUSIBILITY: NOT A MOMENT LONGER, I have impeached you in my heart but for the love of our beloved nation I will accord you the full honor of a President.

Mr President Sir, I will like to share with you few words that have been in my mind for some time now.

Let me remind you again, that the bulk stops at your table. Obama’s, Cameron’s, Nenthayau’s, Hollande’s assistance will amount to little or nothing if you will not act as the CinC that you are. Nothing is wrong in seeking assistance where there is lack of capacity but be careful what you assent to at this difficult time. At what cost is this wholesome assistance coming to us? I assure you it is going to be a big collateral damage on our security as a nation in the long run. Remember Iran, Iraq, Afghanistan, Libya, and Egypt.

Sir, whether you leave, or stay, in office, beyond 2015, you are a loser, if you maintain the status quo. I will tell you how.

Your diplomatic passport will be honored as a Nigerian President if you happen to continue in office beyond 2015 but no reputation to your person as Mr Goodluck Jonathan, because that name reeks of corruption.  Even as a Nigerian President, world powers may allow you in their countries but you will be barred from meeting the heads of such governments. For example, come 2016, if Senator Hillary Clinton (D) happens to be in the White House, imagine how you will be treated because her assessment of your government states categorically that you are CORRUPT. If it happens to be McCain(R) or any of his associates, I doubt if they will even allow Eagle One to land on their soil because according to them there is no government in Nigeria. Britain, France, etc will follow suit. How else can one qualify a leader in a state of murderous complacency?

If it now happens that you will not come back, sir, those that have professed readiness to die for you will be nowhere around you; they will dissociate themselves from a “pilfering” government like yours even though they are your closest allies; they will be gone with the reign of the moment. Cast your mind back, did they respect you while you were deputy governor of Bayelsa State?

I will urge that you use the few months that are still available to you to right the deeds of this your government. It is a plea so that your diplomatic passport will not be useless.

Corporate governance in government, public stimulus; servant-heartedness; respect for civic and civil rights, transparent leadership, probity, and equitable distribution of wealth, of all these, nothing is too extraordinary in what the masses are asking for.