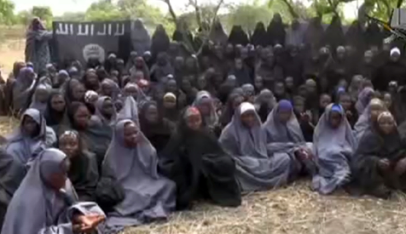 has joined the league of Burj Khalifa and

the statue of liberty.

Seeming to mock our dear country,

The tourist asks, “Where is it?

Can I go see Chibok?” Like no one knows it was

and is a ravaging disaster.

with books soiled with the tasty stew of last night,

innocently clad in their dresses of piety,

armed with the desire for education

and a passion to pursue dreams

did an act of disappearance on the

fourteenth day of the fourth month in the

fourteenth year of this millennium

Till today, it’s a mystery

No one up took them, no one up knew they were taken

No one up wants them rescued, even one year after

another year starts for Chibok.

And we definitely speak out for your return,

As the new man up, just a step below the clouds,

“What I can pledge, with absolute certainty, is that starting on the first day of my Administration Boko Haram will know the strength of our collective will and commitment to rid this nation of terror, and bring back peace and normalcy to all the affected areas.”

“the attack on Chibok was an attack on the dreams and aspirations of our young people.

“We stand united in our pledge to resist terror in Nigeria– not just through military means but also through the power of opportunity and the hope of a better future for all.”

In all of this, one year is significant

only because of the significance of

(In remembrance of the hundreds of Chibok girls that were abducted from Government Girls Secondary School in Chibok Community, Borno State, Nigeria by the deadly terrorist group, Jama’atu Ahlis Sunna Lidda’awati wal-Jihad (People Committed to the Propagation of the Prophet’s Teachings and Jihad also known as Boko Haram) on the night of 14–15 April, 2014)