I had promised my wife that I was going to switch off my phones and that I wasn’t going to put my hands on any gadget, let alone adding or editing any manuscript, but on Monday, I broke that promise as I was passionately provoked to reply a guy on one of the social media platforms when he ridiculously asked: What is Oby Ezekwesili’s pedigree for her not to be questioned by the DSS? I jokingly told my friend that I will only answer his question if he would mention someone in his lineage that could rival her record. Did I say too much?

Need I say that 21st July is my birthday and on Monday my wife had me celebrated? One of the many calls I got came from my very

good friend and father, a retired Commodore who now resides in Kaduna. Immediately after the Kaduna holocaust on Wednesday, he was the first person I called to confirm his safety. As usual, I heaved a sigh of THANK-YOU-GOD, when he confirmed that he and all that are his are in safe haven. After we ended our chat, a voice flashed through my mind: WHAT ABOUT THOSE THAT DIED? I had to fight an unconditioned reflex in me that craved for tears.

May God grant the families who lost their loved ones the fortitude to bear the loss(es).

Immediately after the twin bomb blasts that tore Kaduna into pieces, many “social activists” and commentators jumped on their tools of trade (social media platforms) to vent various angers; some directed theirs at the government due to the inept handling of the Boko Haram situation, some said it was GMB that organized the attack on himself so as to gain public sympathy, while some prayed to God to be their guide and guard in all of these unbridled mess. Expectedly, the usual bland message from Aso Rock came that they are working round the clock to bring the perpetrators to book.

I will like to peg my tent with the first and last sets of people while I ask those in the “middle class” the following two questions? 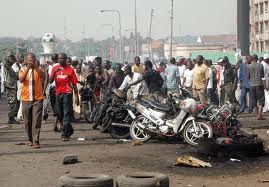 Sir, I do not see you necessarily sitting ‘on’ Aso Rock before you could effect the change that you desire, but I see in you more of an Elder Statesman that could call some boys/girls within and even outside of your domain to order. God grant you the strength sir, I know you have the courage.

I revel in the deep knowledge of my fellow countrymen about the ongoing shelling of Gaza by the Israelis. I must add my voice that it is nothing short of UN’s conspiracy in annihilating some purported ‘dangerous’ set of people. Although Hamas is an animal, Israel is more brutal in this act of holocaust. But in all of these, so many of us have failed to understand that Nigeria is becoming more and more docile in this continent where we were fondly referred to as ‘the giant’. France is gradually taking over through her control of military bases in some of her ‘colonies’, and I see a big conspiracy against the giant of Africa from her surrounding Francophone sisters. That was why it was easy for Hollande to summon a meeting to be held in Paris, under the guise of providing help and solutions to Boko Haram insurgency. But rather than our dear Presidency reading between the lines, they see it as an escape route from going to Chibok.

If we had been up and doing in stemming the scourge of insurgency in and around our territory, our surrounding neighbours would not have been at ease enough to invite us for a meeting because the Haramists would have checked out of here to wherever.

Nigeria is going down, locally and internationally. There is no denying it. We need help.

Adebayo Coker is the author of Societal Fragments and A Man Like Me: Noteography Of A Father To His Son ( http://www.amazon.com). He blogs via http://www.pausibility.wordpress.com and tweets @adebay_c

2 thoughts on “#PAUSIBILTY: THIS HOLOCAUST AND THE REST OF US by Adebayo Coker”