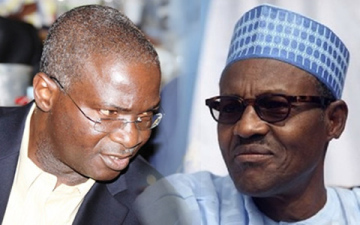 My good friend and brother, Jeff Underwood asked me earlier in the week if I’m considering posting any other thing on my blog apart from politics. It’s a good question as I have asked myself the same over and again; in fact, I attempted being apolitical on my blog sometime back but to tell you the truth, there is no way one would demand change in this clime without being political, a passivist or Dokubo-like, especially with the rodents that parade themselves as leaders because people with good brains lack the will to offer themselves for service. We must start considering our stance. Enough said.

The Government of the Federation or of a State shall not adopt any religion as State Religion.

Section 10 of the 1999 Constitution of The Federal Republic of Nigeria.

The motto of the Federal Republic of Nigeria shall be Unity and Faith, Peace and Progress. Accordingly, national integration shall be actively encouraged, whilst discrimination on the grounds of place of origin, sex, religion, status, ethnic or linguistic association or ties shall be prohibited.

Section 15; subsections 1 and 2 of The 1999 Constitution of the Federal Republic of Nigeria

The continued bruiting of Muslim-Muslim ticket by the APC is becoming more interesting day by day. How? I believe some will ask.

I have always and will continue to be an advocate of LET THE BEST CANDIDATE(S) WIN. From the days of PDP zoning formula to these days of religious hegemony, I still maintain my stance. I got thrown aback when people that I strongly hoped would be in the forefront  of advancing the cause of Constitutionalism are the ones going to town to peddle the worst from their sickened imagination. The party in question has not publicly announced or presented any candidate, either for the State or Federal, then where did this campaign of APC promoting Mohammedanism come from?

Should it ever happen that any good party presents credible Presidential and Vice Presidential candidates that happen to practice the same religion, of what relevance is their religion to me if there will be deliverables from their governance? What value has the occupation of the office of the President of Nigeria by ‘the pious gentleman’ added to me as a Christian ever since he has been in the office? His maladroitness has brought all of us a big shame across religion divides, except for the few ones that still drink from the empty CAN.

Fashola is one gentleman that I will praise-sing anytime, any day because I see the results of his occupation of the Round House. Should I badmouth this ‘correct guy’ just because he is a Muslim? Had Lagosians  been so dumb to have rejected this young man in 2007 on the basis of his religion, is it not possible that  we would be crawling on our knees in the development theatre by now?

Let me quickly sound a note of warning to APC at this juncture: Whatever political permutation you plan to engage that’ll not result into the emergence of BRF as a running mate at worst in the next Presidential Election, then count your party as losing a vote already; my vote.

Why this politics of religion in our land? What you and I need is good leadership. To me it doesn’t matter if he or she is an atheist (I’m sure my Pastor will organize a deliverance session if he happens to read the last statement) I bet you religiosity is totally different from godliness. One is a mere ceremony, the other is LIVING.

However, far and beyond worshiping God within a constructed frame, or hitting your head on the ground in His worship because you want your religion to be seen as superb, while your heart is filled with so much hatred and thirst for blood, try to know that your heart should be His throne because that is the sanctuary God inhabits, and not your religion, just as it has been from the days of old.

Judas Iscariot was always with Jesus Christ, yet he sold his master for some ‘sikini money’. Jang, Akpabio, Uduaghan, Dickson, Orji, Sullivan and co, are all Christians, yet they won’t agree to the result of a simple majority vote.

I believe by now all leaders should look towards Zambezi Area (Zambia) and learn from the newest case of what money cannot buy.

This is a secular state; please don’t come here with that stupid politics.

I heard a lawyer has applied for a Stay of Proceedings against the state, to bar it from continuing its Inquest into the Synagogue building collapse. How I wish that such lawyers or members of their families were victims of that building collapse so that they will have a first-hand experience to defend The Synagogue so well.