I was not able to watch the clip of the jumping legislators till last week Sunday. Remember I told you I didn’t want anyone to put sand in the garri I was enjoying at Ake Arts and Books Festival (AABF).

By the way, for some of us that are complaining about the dearth of the reading culture and literary life in Nigeria, we should endeavor to revive it by organizing, promoting and attending literary events like AABF, LABAF and the likes. I must commend the good work done by Lola Shoneyin and her team on the smooth organization of AABF. Kudos!

Back to where we were. END_OF_DOCUMENT_TOKEN_TO_BE_REPLACED

Here’s a video of the Press briefing by the Ag. CP, Emmanuel Ojukwu, Force PRO at FHQ Abuja on the 21st of November, 2014. He refers to APC supporters as never-do-wells and the briefing is laced with all manners of balderdash.

The gubernatorial election in Ekiti State has come and gone, leaving in its wake shock, conciliation and much more. While the staggering results of the election has left many optimists in the ‘Nigerian-project’ disenchanted, stalwart-members and well-wishers of the ruling Peoples’ Democratic Party within and without Ekiti State have found new voice and renewed strength to boast of their ‘unparalleled’ credibility to win elections, any-day, anywhere. No wonder, even the President of the country and the recently cross-carpeted hungry-man-in-politics believes their party will win the Osun State election and any other that comes their way as they did in Ekiti State.

I have an anecdote. Sometime between 8.00 and 8.30 a.m. this morning, I was scanning for a television station that will be unbiased in its coverage of the Osun State election, which incidentally holds today. I stopped when I got to the ‘Channel of the Year for the 8th time’, there was well-groomed gentleman decked in well-trimmed suit admonishing his END_OF_DOCUMENT_TOKEN_TO_BE_REPLACED

Some people record the incident for the public and dem don broadcast am on TV. END_OF_DOCUMENT_TOKEN_TO_BE_REPLACED 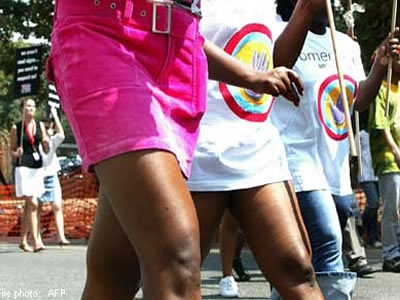 Women wey dey wear miniskirts or tops exposing part of dem stomach may be arrested by the Police.  One police person talk am in Swaziland.

“The act of a rapist is made easy, because it would be easy to remove the half-cloth worn by the women,” Wendy Hleta, na em yarn am.

“They will be arrested,” she said.

END_OF_DOCUMENT_TOKEN_TO_BE_REPLACED

The following na the story wey the MD of the Pharmacy outlet, HealthPlus Magodo, wey robbers attack recently yarn about the incident. Read and make your own conclusions…

“Dear All, this information should have come earlier, but we were waiting on the police to make progress with their investigation, so that we give accurate information. On Sun 2 Dec, armed robbers attacked Magodo Branch. A customer was shot in the foot (he is ok), personal items, cash, walking sticks, perfumes & cash were stolen. A customer’s car was driven away (its been found). Another’s car keys were taken. An unfortunate incidence indeed.

Our Guard did not report to our CSO neither did he report to his Prudential Guard. He disregarded SOPs. By Tue 4 Dec, we watched the CCTV recording & the 1st observation was that the recording started when the robbers were already inside the store. The feedback was that the Pharmacist on duty switched off the CCTV so that the robbers will not damage it, but that he later switched it on. If this was the case,we would have seen the beginning of the shift @about 10am.We would have seen the normal activities till the 2 robbers came in, END_OF_DOCUMENT_TOKEN_TO_BE_REPLACED

The Police Public Relations Officer, PPRO, Ngozi Braide, has confirmed that the police is still searching for controversial singer, Gabriel Oche-Amanyi, better known as Terry G, over a hit-and-run case.

The PPRO (Police ‘talker’) don confirm the incident say the thing actually happen. She talk say when her men call Terry G on phone; he yarn say na Benin em dey. “He is yet to honour the invitation. That is why we are yet to arrest him. We have also searched his house somewhere in Agege, but we did not see him, up till now. I’m not a doctor and can’t tell you the gravity of the injury sustained by the victim, but I’m aware he was rushed to the hospital.”

“He is not wanted by the Police. It was a minor accident but some people just want to make news out of it. He mistakenly hit the guy in question, but they sorted it out that night. He even gave the guy some money for treatment. Terry G travelled to Enugu this morning (Wednesday) for a private show,” Ozone said.