That before now has died?

And colour of butt that occupies the driver seat 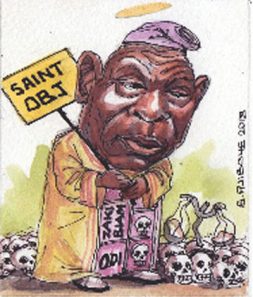 When two personalities, who have been throwing the juggernauts at each other with everything they got, decide to combine their forces, it may lead to not only the annihilation of the opposition but also of themselves.  Especially when such personalities bear names that portends no good. Find below the letter written by A-RE-MU (Slicer of nose) to A-TI-KU (We are dead):

Like ever before, I am constrained to write this letter to you because at my age, I am struggling against senility. However, the situation in which my country has been END_OF_DOCUMENT_TOKEN_TO_BE_REPLACED

(Editorial note: This was received about a week ago.)

My dear people, I must start by congratulating us for the consolidation of democracy. Two weeks ago we had both Gubernatorial and House of Assembly elections. Even though there were pockets of skirmishes, I can submit that we are all determined to make this system work and with time the imbroglio will be dealt with, then our nation will be one of the exemplified democracies in the world.

I could not write my column last week because I was busy coordinating my son’s first birthday. As I moved around town during that period, a thought kept coming to mind: If posters could cry, we all would be flapping our arms and feet through the pool of tears that our nation space would be submerged in. Also if posters could laugh we all would be running with a finger in each ear in a bid to block out the maddening END_OF_DOCUMENT_TOKEN_TO_BE_REPLACED

On April 14th 2007, I was at the Christian Corpers’ Lodge in Alagbaka, Akure, Ondo, waiting for Maurice Iwu’s (or Iwuruwu as my friend calls him) INEC to announce the Winner of Ondo State Gubernatorial election. The wait lasted more than two days and allegations of rigging out Mimiko started flying round. Against public opinion, Dr. Olusegun Agagu was announced as the winner and this was followed by mass protest in Akure, Ondo, Owo and several other towns and villages in Ondo State.

Dr. Olusegun Rahman Mimiko was the people’s choice by a wide margin but the PDP rigging machine that was well oiled by the then president; Chief Olusegun Obasanjo and manned by the controversial Prof. Maurice Iwu returned Dr. Olusegun Agagu (they love this Olusegun name in that state) as the END_OF_DOCUMENT_TOKEN_TO_BE_REPLACED

It will be gubernatorial elections tomorrow. No doubt, I will urge everyone to go out en masse, just as we did during the Presidential Elections, and cast our votes for any candidate of our choice. Nobody is going to drown especially if you take caution and do not go near the lagoon if you cannot swim.

Please and please, stop degrading the palace of The Oba of Lagos. We all have failed to realize that there is no  superhuman. What happened was just an act of the gods as it occurred to me that someone had been sharing in the drink of the deities for a long time but the day in question was just the day of  reckoning.

The task before us is to make a choice of who will govern our states. And I wouldn’t want us to be carried away by any side attraction or distraction. END_OF_DOCUMENT_TOKEN_TO_BE_REPLACED

The dark clouds that gathered on our nation has finally  cleared. The jubilation on the streets could be likened to the celebration we had when that killer wolf, Abacha was announced dead (no apology to the Abachas as I am not responsible for their father’s irrationality). The good Lord loves this nation. The doomsayers and those prophets that had in their own flesh believed the elections will not hold  and if at all it held, the incumbent will be returned, should be left alone in their pulpits as I would want to believe that people would stop END_OF_DOCUMENT_TOKEN_TO_BE_REPLACED

On Saturday, the 28th of March, 2015, Nigerians will troop out to vote in the first of elections that is adjudged to be the defining step of a long-awaited change. However way we look at it, this election will define the destiny of Nigeria, going forward, and beyond the business-as-usual that our leaders have made governance in the country.

As we so troop out, we should bear it in mind that we deserve change judging from where we are coming from. Be it a new regime of the incumbent or of an old or fresh hand, we demand new beginnings. Only hypocrites (and Nigeria boasts of many of them) would not admit that the country needs change. The contents of our meal tickets and plates must of necessity change, the outlook of our roads must change, the kidnap of school girls must stop, the delay of workers’ emoluments must change, the death of Nigerian END_OF_DOCUMENT_TOKEN_TO_BE_REPLACED

(The following constitutes a personal account from a concerned elderly Nigerian lady, which had been sent in about a week ago)

From what is playing out on TV, I believe the main reason for postponing this election is borne out of PDP’s fear of losing the election. Probably, they needed more time to intensify their campaign and try to convince the general public. They observed that APC was gaining so much attention from the public despite all the campaigns of calumny. As much as possible, they are trying to promote the President, probably buy and pay keke-napep, motor park, some churches, drivers. I believe they are playing END_OF_DOCUMENT_TOKEN_TO_BE_REPLACED

For the first time since the inception of our new democratic dispensation, a vast majority of Nigerians speak with one voice; old, young, professionals, artisans, educated and enlightened. People speak of their readiness to participate in this election but the maddening quest of a single man and his cretinous associates to hold on to power at all cost, pushed them to make a dive of a lifetime which I foresee will earn them broken skulls. In a high profile wrist-twisting show of power, the lazy service chiefs, acting under the directives of their Grand Commander, forced our democracy to come to a strategic halt by their singular act to stand against the wish of the people to go to the polls and effect the change they so yearn for and deserve; but just like I said last week, this is a change that will come to be, it is the Movement of The People (MOP). END_OF_DOCUMENT_TOKEN_TO_BE_REPLACED

My good people, I hope the year is starting on a good note for you, especially with the ongoing political gimmickry that is clogging our clouds? The furor is a ploy to get you to submit to either a true leader or a loot leader, and the kind of leader that will emerge depends END_OF_DOCUMENT_TOKEN_TO_BE_REPLACED 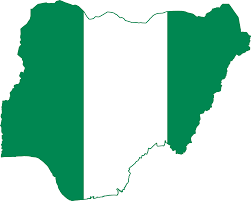 We understand that being a leader at all is a daunting task for many persons, especially for you; we can imagine the burden of our expectations of you as the leader of Nigeria. It isn’t easy. It is just so sad that ‘we, the people’ expect you to deliver on many fronts, at least even if it’s just the promises you made to us against the 2011 elections.

Having had an opportunity to preside over the affairs of this ‘great’ country for about six full years, it’s certain you have personally had your ups and downs that usually characterize an average human life END_OF_DOCUMENT_TOKEN_TO_BE_REPLACED

Together, let us assume there is a Nigerian called Peremoi, who has chosen not to vote in the forthcoming elections which some persons have rechristened FeBuhari 14. Is this out of ignorance? No, otherwise!

Voting in any democratic election is a sanction of the foundation of that particular democracy. As a sanction, voting in Nigeria is a way of saying, “’Yes, I agree that I am a Nigerian, that Nigeria has been properly founded and that ‘we, the people’ were actually we, the people who came to a roundtable to collectively agree to function together as a nation, draw up a modus operandi for how we will live together as one indivisible entity; leaving behind the tags that hitherto set us apart, religion, tribe, level of education and possible other sentiments.”’ At the moment, this is not so; END_OF_DOCUMENT_TOKEN_TO_BE_REPLACED 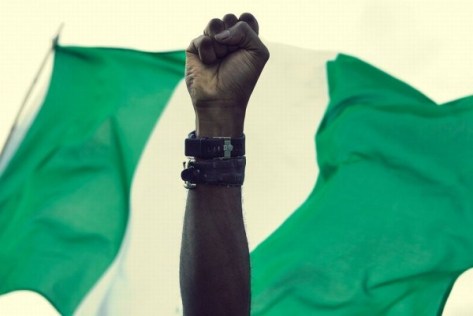 Let’s quickly assume that there was never the Northern or Southern Protectorates; hence, no need for their amalgamation into what is today known as Nigeria, what would I be and what would you be? Today, you will not be the president of Nigeria and I will not be a Nigerian because there will be nothing like Nigeria. While I will be END_OF_DOCUMENT_TOKEN_TO_BE_REPLACED

Without regret, I am falling deeply for this temptation which I have eschewed for some time now. God knows I have tried and I am sure you too can attest to that.

Even when I was tempted some weeks ago , when a particular junior minister, who ought to be busy with his national assignment, left his duty post to parade himself as the Federal Minister in charge of Lagos state, by going to Apapa to irrationally interfere in a matter clearly out of his jurisdiction, I ignored.

I also did not say anything when I was tempted sometime ago, to advise our dear brother from Ile-Ife, to pray without ceasing because I see a foundational curse of public display of stupidity in his family. Though I never met his father, what I read about him reeks of foolishness and if the saying: “like father, like son” is right, then he has truly beaten his father to the record. It will be destructive for any of his offspring to tread that path, for this generation of ours does not tolerate laxity END_OF_DOCUMENT_TOKEN_TO_BE_REPLACED 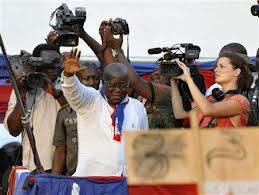 For say I be prophet, I go predict the scores say na that Nana go win.

You are welcome to the midday special episode of Good Morning Naija, a MeroëRadio show wey lAkUnLeScReWs bring to you.

“Campaign go end today. Tomorrow na elections!”. That na wetin the campaign managers of the two parties contesting for the office of the United States President yarn me this morning on my way back from the states (of sleep, if you no mind).

They yarn say even though the campaign go end today, person wey go win in the election which go take place in less than twenty four hours remain very unclear.

Obama join Romney both get 49% support. Na one new CNN Poll talk am.

Them sha dey release different poll results for different battleground states and all of them dey similay, now wey na only few hours remain before the election.

Make we wait for the election to come and go. But from our own side, we dey see say Obama dey try…